we finally got to our hotel a little after 7:00pm. the airport bus lets you off within the garage. you walk through the doors and reception is right there. a porter came over to me and asked to take my luggage ~ i feel bad in hindsight but i was so tired and overwhelmed... i hesitated and said that i was okay with them. he looked jilted... like i had denied him the pleasure of relieving me of my bags! i learned with more experience, they don't let you carry anything if they can do it for you ~ even little shopping bags. oh yes, the effiency of creating jobs in japan! no wonder the unemployment is so low... 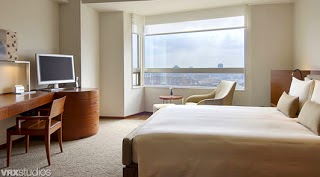 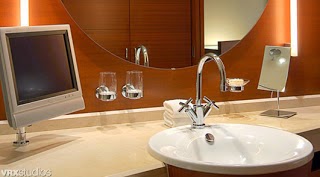 our favourite part was the bathroom~
these are our pictures 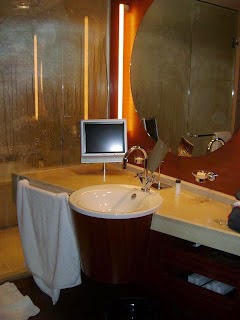 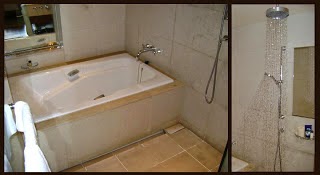 there was a small closet opposite the sink with two terry robes and cellophane-wrapped slippers. i love to save the environment but i don't like wearing something next to my skin that has been worn next to uncounted numbers of other people's skin so i wasn't a fan of the robes but i slipped a pair of the slippers into my husband's luggage. (they are now his basement slippers.) i also took all of the provided toiletries ~ they were packaged so nicely!

we could see tokyo tower from our room but it was pretty far away ~ we got a better view of it from the mori tower.

one thing they didn't mention to us was how the lights work. there was a maid in the room when we got there so she had used her key card and therefore took it with her when she left. 30 seconds later, the lights went out. none of the light switches worked. we felt like idiots but my husband called the front desk and they explained we need to put our keycard in the slot beside the door in order for the lights to work. duh.... we found out that it's pretty standard of japanese hotels. usually a porter will accompany you to your room and bring your bags on a cart but for some reason, we were on our own here. also on the lights/keycard pad are buttons you can press which light up on a panel outside your door ~ one for "do not disturb" and the other to "please make up room".

as nice as the room was, the bed was not comfortable. it was very hard. (i must have told my husband i liked it but... i really didn't.)
my husband is all about reading up on things before buying so he was all over the hotel review sites. he actually even wrote his own to submit of each place we stayed. this is what he had to say about our experience~

Grand Hyatt Tokyo: King Superior Room
Said to be one of the best hotels in the world. I have stayed in a lot of nice hotels and am hard to impress but this hotel is by far the best.
The Room: Everything from the décor to the mini-shampoo was high-end quality. The bed was a bit hard for my liking but my wife really liked it. The bathroom was awesome… Rain shower and separate hand held shower head that had it’s own controls. Everything was done in high quality dark hard-wood. 42inch flat screen tv but not HD.
The Service: As per usual Japanese culture the service was great. They kept wanting to carry my bags for me…even a little grocery bag. The reception spoke pretty good english.
The Amenities: Didn’t really use them as we were out most of the time. Gym, pool…the usual. The lobby had several floors of high-end restaurants with variety of cuisines. If you want to spend a lot of money on over-priced food then eating at the hotel is for you. We ate at the Japanese restaurant here one night and it was okay…the portion sizes were small but the price tag the highest of our trip. However, the décor and atmosphere was incredible. Situated next to Roppongi Hills so high-end shopping and food close by.
Great experience… price tag about $530CAD per night.
I rate it 9.75 out of 10.

we went over to the roppongi hills mori tower for a few hours (which i'll explain next time) but came back to the hotel fairy quickly because we were starving. we didn't realize that the restaurants would be closing at 11:00.

the hotel has about 11 restaurants, i think. my husband wasn't in the mood for sushi so we went to one that seemed to have "regular food". there was a steak house but we thought we should try some japanese cuisine. it was quite good! i had chicken and soba and my husband had tempura vegetables. 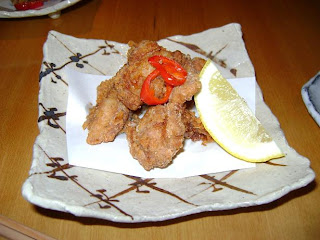 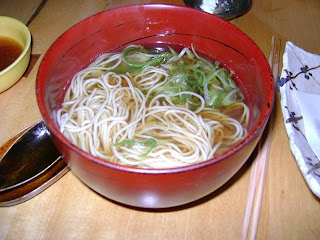 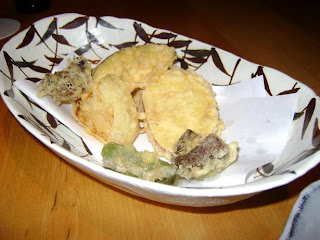 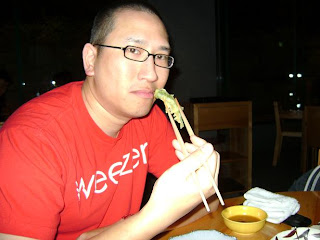 note: i never got around to finishing up explaining the first day. the only "story" really to tell was when we went over to the area around the mori tower and roppongi station, we found someone's JR pass on the ground. (i can't remember the name on it, but it looked portuguese...) it was dated for three weeks. knowing what we paid for ours, i felt horrible for this person who had dropped theirs. in hindsight, i should have left it there where i found it, but instead i took it into the station and after some miming trying to explain the situation, gave it to an attendant. he didn't look like he understood me at all. 5 years later and i still feel bad for that person and how i handled it. i was only trying to help. hopefully karma took care of that guy.

in my very sparse notes, it says: hubby bought taco doritos, giza giza ripple chips and cola shock and i bought choco melon pan, cream pan, onigiri and calpis from am/pm and i got regular melon pan and a lipton royal milk tea from another konbini.

we did NOT go to odaiba to the oedo onsen monogatari.
Posted by kmah88 at 7:15 PM