things i bought for the trip

so, we did some shopping the other day. less on my mind now to worry about now.

the first thing on my list was a bathing suit ~ omg! there are some ugly suits out this year! i knew it wasn't going to be easy to find something i liked because of the fits but i didn't know that it was going to be difficult to find just a normal looking suit! i've never seen so many gaudy prints... anyway, after shopping for about 6 hours in downtown toronto, i was about to give up. i had tried on a few at la vie en rose but they didn't have a large top in the tankini style i tried on. it was aqua and green... not the most flattering on me but i needed something in a halter style ...for support purposes. the straped ones just weren't going to cut it. i didn't even try on the ones at old navy, which is where i got my last bathing suit. they were all hideous! even the solids had ugliness going on.


so, we were back at yorkdale picking up a pair of converse chucks for me

and i decided to check out that l.v.e.r. location for my size in the "make-do-with" one i had tried on before. they didn't. but they had a kind of cute black and white print with a lime green lace running through it. i tried that on in my size... again, i could make do with it. i was about to go up to the counter and pay when i decided 'maybe i'll just try on a one piece'... i picked up the one piece version of the suit i was going to buy and a plain black one. i picked up the black one and noticed the tag said slimming style or something like that. i put it on and immediately found out why. it has some sort of built in girdle or something. the fabric around the mid-section and butt is like spanx. awesome! and the fabric in the mid-section has a top layer that is ruched (like loosely bunched up). made as a camoflague for tummy rolls... yay! i found my suit. and it was 10 minutes to 9... just in time~

i also was looking for a gorilla tripod... i found one... for $80. screw that! so i ended up buying a similar version (knock-off) for $14 on sale at black's. good enough. actually, the gorilla is much better... but still not worth the price. the one i bought is by optex and it's more like stacked triangles than the gorilla's ball-like grips. it's really stiff and hard to bend too. but, i'm sure it'll still work. 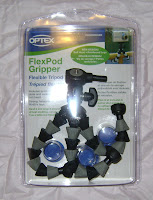 of course, the first stop we made when we got into the downtown area (even before food!) was the JTB office. straightforward visit once we found it! the building was easy enough to find ~ it's the first building in on the north side of carlton from yonge street... right next to the giantic shoppers drug mart. go inside and to the elevators ~ up to the 15th floor (although you're starting on the 5th at ground level... due to parking, i guess). the confusing part is once you get off the elevator. the suite numbers don't go in order for some strange reason. from the elevator, you turn right. there the hall spilts right or left. go left, follow the hall, and 1510 is on your left. just walk in and ring the bell if no one is there. if you didn't pre-order your exchange orders like we did not (didn't know we were supposed to!), you just fill out a form with your name, address, etc. and they print them out for you. you don't need to bring any id or anything with you but your name must be written EXCATLY as it is on your passport for japanese customs to honour the exchange. you can pay with any major credit card or cash. i can't remember how many yen it came out to but with that day's exchange rate, we paid $301 each for a 7-day pass. we were worried that our trip was 10 days and if the pass began the day we get there, then it would end the day before we go back to tokyo from kyoto... which would be pointless! apparently, when you get the passes, you can tell them which dates you want it for. in our case, we'll have it start the day after we get to tokyo.
remember~ this is only the exchange order for the JR pass. you won't recieve the actual pass unti l you turn in the order at an exchange office in tokyo. (just past customs, i think, in narita or there are several JR stations you can do it at...) but you MUST pay for the exchange order in your own country. no, you don't have to pay more for the actual pass. (see my previous post) 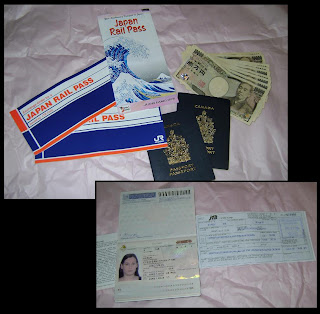 we also exchanged some money into cash ~ i paid just over $1013 CAD for 90,000 yen.
although i haven't started packing yet, i have the cash, exchange orders, and passports sitting on a table in my bedroom, ready to go.
my mom wants me to save some japanese coins for her, so i'll have to remember that. (she's a little nutty when it comes to coin collecting!)

i also have been in need of a purse. in some ways, i can be very girly... other ways, like carrying a purse and owning multiple pairs of shoes, etc. ...not so much. i generally carry all the stuff i need in a backpack or just my pockets. that's good enough for going back and forth to school or small trips downtown but not for long days of sightseeing. i'm extremely picky when it comes to things like this. and it's not so much as what i want but more like what i don't want. i didn't want any type of pattern, lots of metal detailing, bright colours... just something basic that i could carry around, no matter the occasion or what i'm wearing, and nothing too big... do you know how hard that is?!?! omg ~ what are these women carrying in their purses that they need these giant bags for!? cell phones and cameras and other electronics that you may need to carry are so small these days... yet purses just keep getting bigger! and the range of crap that's out there... it's like they had everything except basic. everything was studded, printed, glittered, labelled, and garish! i was about to pay $80 for a modest guess bag made of canvas (i liked it but it was very casual looking) even though it had a few too many cargo pockets. i thought that i would leave it and come back for it if i couldn't find anything better. it was on my continued search for the bathing suit that i came across a fairly boring purse at aldo accessories for only $40. ...so i bought that instead. it came in light tan, black, and the light grey one i bought. i decided to go for the grey to "spice up" the bunch of black accessories i have. it's still much bigger than what i need but i couldn't find anything smaller. really, all i carry are my wallet, change purse, phone, gum, chapstick, and occaisonally my camera. that barely covers the bottom... for the rest of the shopping day, i was very eco-friendly, accepting no plastic bags and putting everything we bought in my new purse! 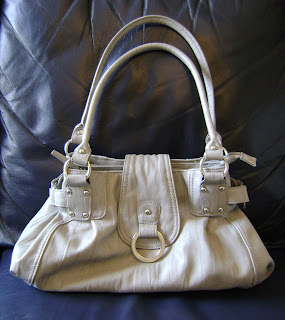 something that i had forgotten to put on my list actually made it into my shopping cart at the grocery store yesterday. earbuds... for $5! haha ~i was wondering if they would even work but surprisingly they do... and pretty well. i hate regular earbuds. i guess it's because i'm too much of a "princess and the pea" type but they really hurt my ears. you've probably seen the newer styles that are out now... they're pretty much just the speaker part covered around with a rubbery silicon type stuff that fit quite nicely inside the ear canal. (what kind of huge eared people are out there that are comfortable with the other style, i wonder?) anyway, these ones were probably marketed for little teeny-boppers (do people still say that? did i just give away my age?)... because they have giant hotpink jewels on them... but, hey... $5! 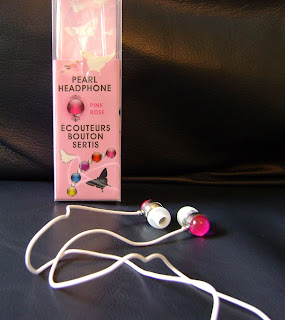 so, all my pre-trip purchases have been made. i even picked up a pair of sunglasses... but i STILL feel like i'm missing something.

any recommendations? i was thinking about bring at least one roll of tp... but i'm sure we'll get by!